The First Test Support/First Test Resistance or FTS/FTR is a super powerful trading strategy to get price action traders into high probability trades when done correctly.

As I am about go through in this lesson; when taking reversal trades, it is crucial that they are taken from both a swing point and a value area in the market. Just like any good business in day to day life, Forex is no different in that to make money traders need to buy low (cheap) and sell high (expensive) to make money.

A big mistake that many traders make when entering reversal trades is to enter at the end of the big money, just when the big guys have made their profits and are cashing in their trades.

Instead of doing the easy and buying low and selling high, traders will often buy high and then look to sell even higher. I cover this in-depth in a trading tutorial How Professionals Trade Forex and Hunt Stops.

The First Test Strategy when used on the correct time frames and done well ensures that traders will be trading from both a key daily level and a swing point.

What is the First Test of Support/Resistance Trading Strategy?

The First Test Support (FTS) or First Test Resistance (FTR) is a price action strategy used to get into trades from really high probability areas with the recent momentum when the key support or resistance level is at its most likely to hold.

Price is often breaking through key levels and it can be hard for traders to know what levels will and will not hold and what levels to hunt their trades.

Price action traders should always be using quality price action trigger signals such as A+ pin bars to confirm any potential price action setups at the key levels so they are not entering blindly, but when using the “First Test” method it increases the chances that the level will hold simply because of how the markets order flow is made up; more on that in a little while.

In both the Hunting Price Action Setups From Kill Zones and What Are Price Action Flip Areas? trading tutorials I discuss how traders can learn to target high probability trades when price breaks through a key level and then retraces back to test the same level.

With the First Test Support/First Test Resistance, the same method is being used accept that with this strategy trades are only ever taken on the first retracement back to the support or resistance and not the second,  the third or more. This is very important and explained why below.

Why Does the FTS/FTR Give a Higher Chance of the Level Holding?

Before going onto explain how traders can use this method, and the time frames that this method should be carried out on, it first needs to be explained how and why it works.

The reason price is more likely to reject the support or resistance and hold on the first test, rather than on the 4th, 5th or sixth test is simply because of how the supply and demand is built behind the support and resistance zones.

Each time price tests the resistance it takes a few more bears with it and each time it tests the support it takes a few more bulls with it and unless either of the bulls or the bears can find some reinforcements, eventually price will test the level until there are either no more bulls/bears to protect the support/resistance anymore and price will march straight through. 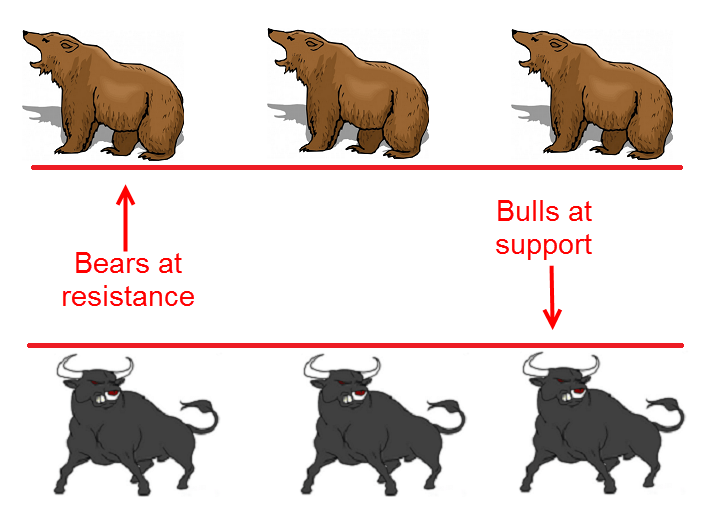 Of course price can at times still move through the level and this is why we still need to match up these levels with high probability trigger signals like the setups taught in the Forex School Online Price Action Course.

Using The Daily Chart to Spot the Break

The first step to spotting the first test support/resistance is to spot price breaking a key level on the daily chart.

This is where traders must be really good at marking their key levels and have a really good routine that allows them to keep up to date with the markets. As the recent trading tutorial The Ultimate Guide to Marking Price Action Support & Resistance goes through it is so important that traders not only are good at marking levels, but also understand the order that they should be doing each process in.

Not only will this ensure that the levels are really strong key levels that price is breaking out of, but it will also ensure that when the traders do go down to play a trade on a smaller intraday chart, they can have full faith that price has broken out of a daily chart.

Once price has broken a key level on the daily chart, then it is a matter of waiting to see if price does start to move back into the old support/resistance level. For example; if price broke lower and out of a daily support level, then the trader would be looking for price to move back higher for a test of the old support/new resistance.

The chart example below shows how price on the daily chart burst below the clear support area and then within a couple of sessions made a really fast retrace back into the same old support area. 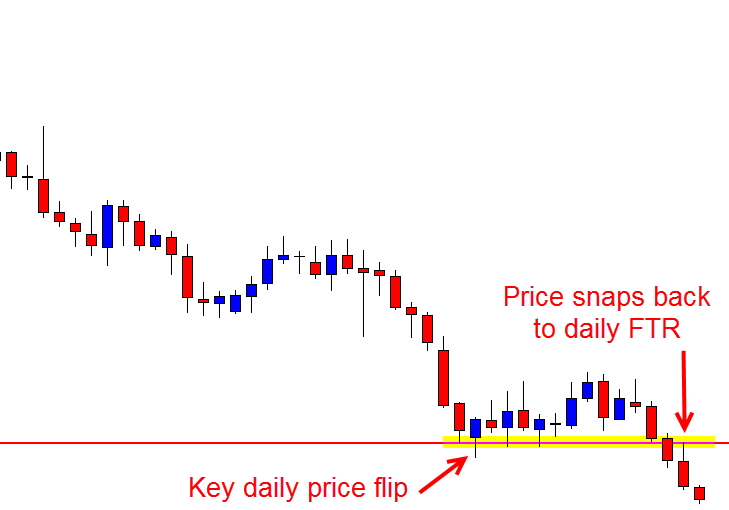 The second example is similar, but with price breaking higher through resistance and then quickly retracing back lower to the First Test Support.

Price was making a clear move higher, broke through the resistance and then quickly moved back into the FTS where traders would then be on high alert. 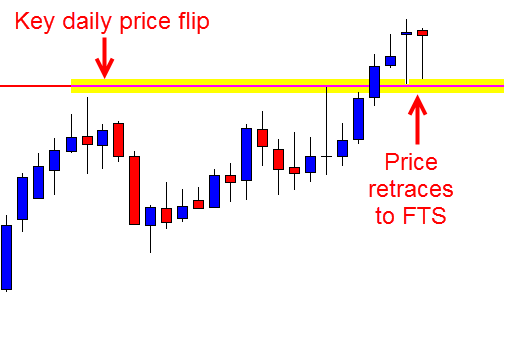 Once the trader has spotted that price on the daily chart is moving in to re-test the daily level, it is time to move down to the smaller intraday time frames such as the 8hr, 4hr or 1hr charts etc, to look for a trigger signal to get into a trade.

Moving down to the smaller intraday charts will allow the trader to make a trade with space and from a swing point whilst also still taking the trade from the key daily area that is the First Test Resistance/Support. I discuss in the trading video attached to the lesson The Lessons Traders Can Learn From Candlesticks & Price Action how taking trades from daily areas on intraday charts works and how it opens up space to trade into.

Chart examples of how to take trades on the intraday charts when price has moved into make the first test on the daily charts key area are below;

The first chart is a daily chart showing how price first broke through a key daily support level and then quickly snapped back to make the First Test Resistance.

This quick re-test is exactly what traders are looking for with this strategy because whilst other high probability trades can still be made when price moves away and then retraces to test support/resistance in time, with this method quick trades can be made on intraday time frames with the momentum from the key levels. 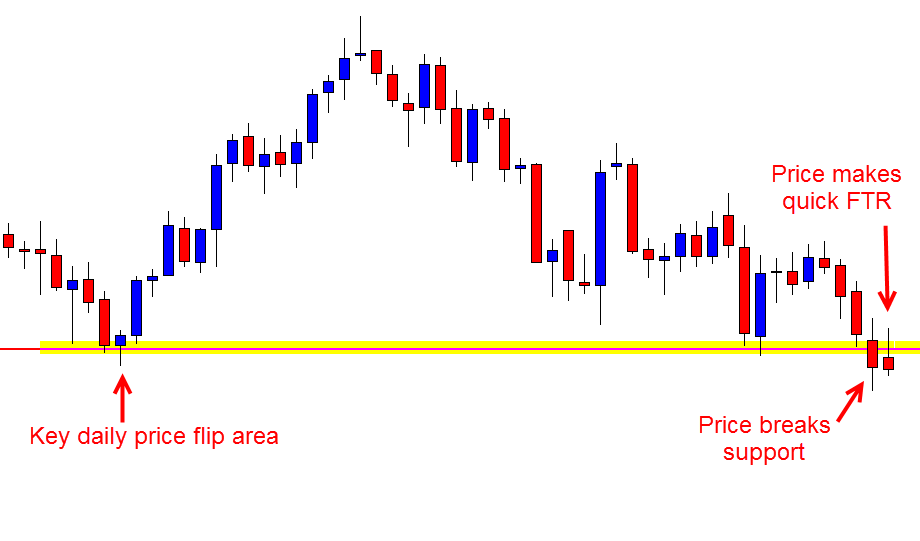 This second chart is the 1hr chart of the same pair as above. When traders start noticing price making a First Test Resistance on the daily chart they need to start hunting setups on their intraday charts and that is where this chart is showing how price moved higher and into the same daily key resistance and formed a solid pin bar reversal.

This pin bar would be the trigger signal for traders to enter a short trade and enter a high probability setup.

What traders also need to take note of is how on the daily chart there is no space, but making the trade on the 1hr chart means that traders are still entering from the FTR and a value area and the pin bar now has much more space to trade into from the correct swing point. 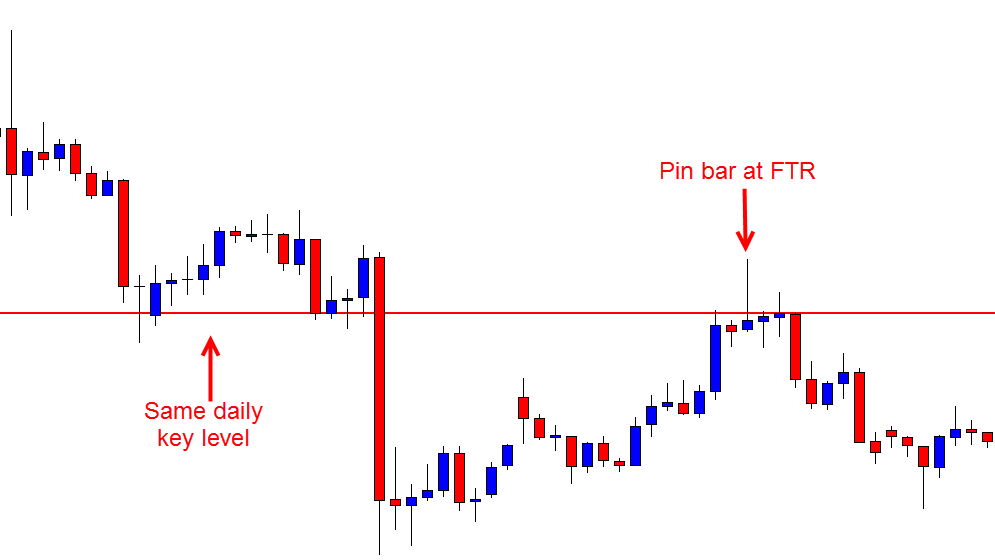 This example is using the daily chart from the example previously in the lesson.

This is to show how after price has snapped back to make the FTR traders would have been then hunting for trades on their intraday charts for high probability price action trading setups. The 2hr chart then formed a huge Bearish Engulfing Bar (BEEB) that stuck out like a sore thumb at the FTR and went bang.

For this strategy to work it is super important that traders first mark really good levels and then are alert to when price has broken their key daily levels.

Support and resistance levels in price action trading are really crucial components and something that traders need to continually every day go through their charts to make sure are in the correct spots.

If you have any questions or comments I would love to hear them in the comments box below!