Whilst the foreign exchange market never actually closes because currency is always being exchanged no matter what the day or time, for traders looking to make money from the Forex market, the trading market is open 5 days a week 24 hours a day with the unofficial close each day being at 5PM New York Close time.

This is also why New York close charts are very important for your trading.

Each country has its own trading sessions that fall in-line with their equity markets. New Zealand is the first in the world to open its market followed the Asian session, Europe and UK sessions and lastly the US session. Below is a graph that highlights the different Forex sessions and how the different markets trade. The graph also shows how the UK and US sessions overlap and trade at the same time as each other.

Whilst the market is open for 24 hours there are times within the 24 hours that tend to have higher trade volumes. The Asian session is known to be often very quiet, where as the UK and US sessions have a much higher trade volume. This is super important to traders because there are much better times to make trades than others and obviously traders want to be playing their trades when they have the highest chance of success.

Volatility is at its highest when the volume is at its highest. For traders to make money they need to have high levels of volatility. Volume and volatility are normally at their highest during the London and New York sessions. As mentioned above; for 4 hours both of  the UK and US overlap each trading session and are open for trading at the same time.

This period is the usually when the amount of trades being processed is at its peak due to the biggest two regions both being opened for trading.

Best Hours of the Day to Trade

The Forex Market is very appealing to trade and the reason is because it’s open 24 hours per day with the exception of the weekends, but what is the best time to actually trade and earn a big profit? There is not a clear-cut answer to this question because it depends on each currency pair and the region they come from as well as the market conditions, however, during the 7:00 to 8:00 GMT, which is around the London session open and between 13:00 to 14:00 GMT, which is around the New York session open are considered to present the best trading opportunities. 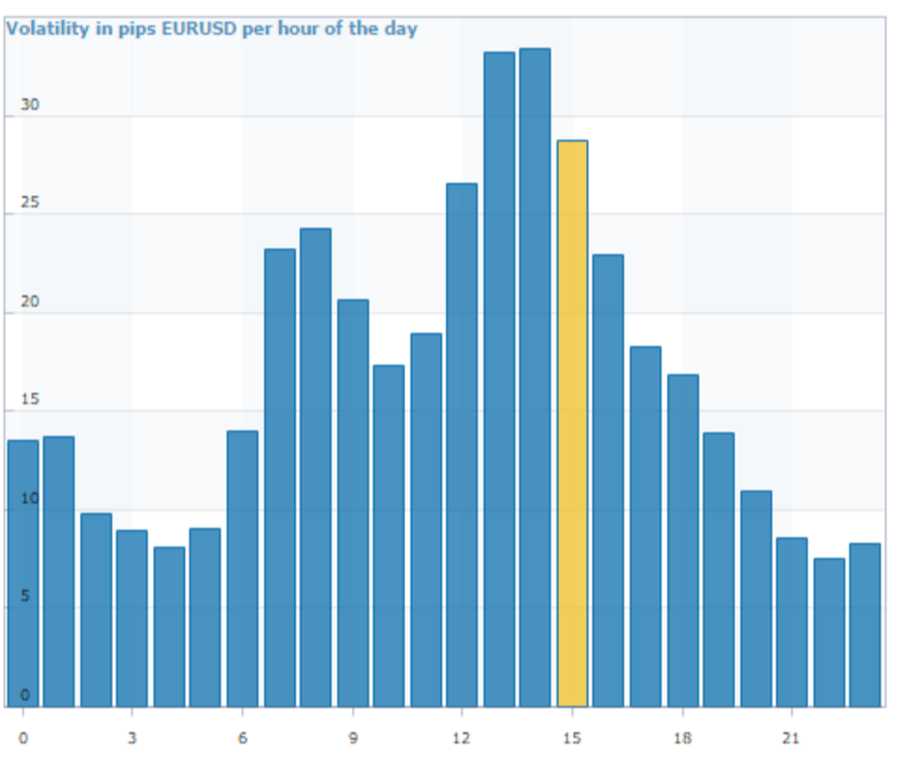 Looking at the above chart which represents the EUR/USD pip range calculated by hours over the last 50 weeks we can notice that at around 14:00 GMT we have a pick in performance and is the most active trading hour of the day.

Best Days of the Week to Trade

Although it’s true that the Forex market is trading around the clock, 5 days per week it doesn’t mean that you should trade every single minute of this time and every single day. Actually, it’s proven that the same like the trading volume is not evenly distributed among all the 4 major sessions the same way the Forex market doesn’t move each day of the week the same, as some days are slower than the others while other days are more active.

Since not all days of the week are created equally certain days in the week have the tendency to exhibit more movements and usually, Wednesday and Thursday are the most active trading days of the week. 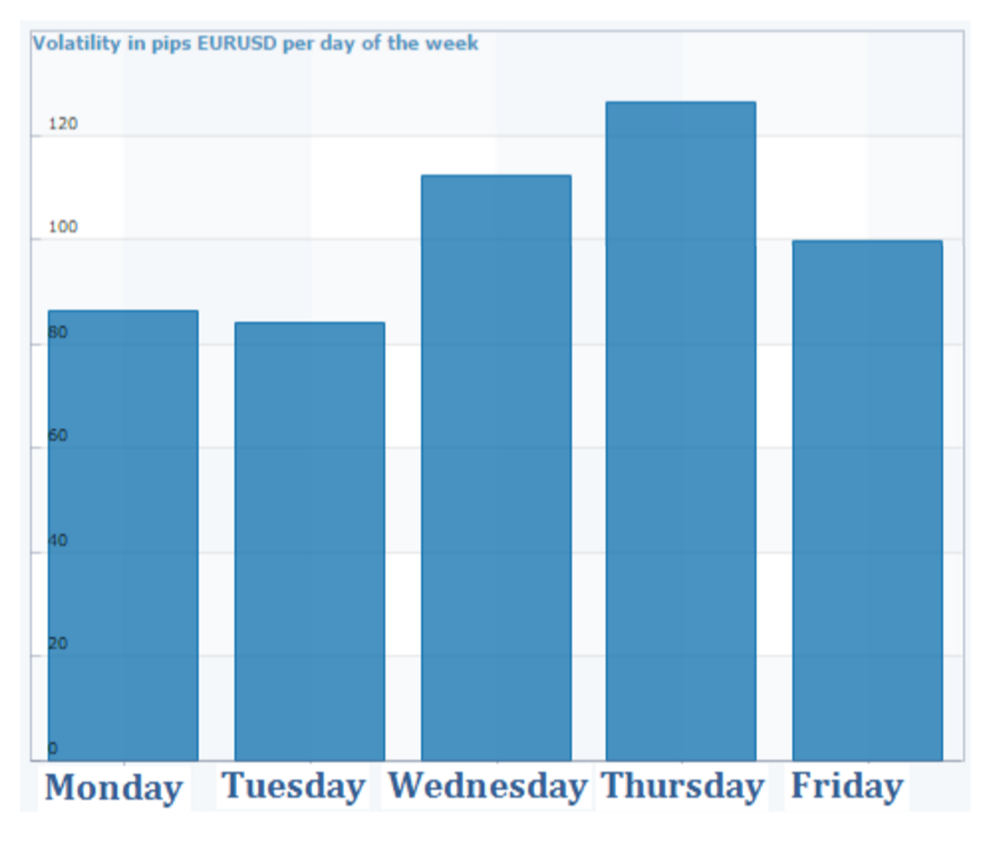 Above is a chart of average pip range for the EUR/USD for each day of the week. It’s recommended to trade more on Wednesdays and Thursdays as it tends to present more trading opportunities.

Best Month of the Year to Trade

Now that we have learned about the intraday and intraweek Forex seasonal patterns, we can look into what are the best months of the year to trade in the currency market.

Each currency pair has its own seasonal pattern  that can also be used to predict Forex price trends. A seasonal pattern can be something that can affect any market not just the currency market because it has to do with potentially the economic patterns of the country.

In the stock market, there is something called the January effect it’s when stock performs better between the last day of December and the beginning of January.

The USD/JPY has a strong seasonal pattern to rally from the beginning of May until August where it finds a bottom. Usually, during October USD/JPY also has the tendency to establish a major swing low.

When Not to Trade

When the market opens for the first session of the week the only market open in the world is the New Zealand market for about an hour. This creates incredibly thin order flow where large spikes can happen. You need to also keep in mind that an awful lot could have happened over the weekend and traders could be on edge waiting for the markets to open. A very toxic mix.

You want to be careful and mindful entering trade setups in the last 2 x 4 hour candles of the week. Often these are traders covering up their positions coming into the weekend and you do not want to be caught in their way entering into the market and false moves. 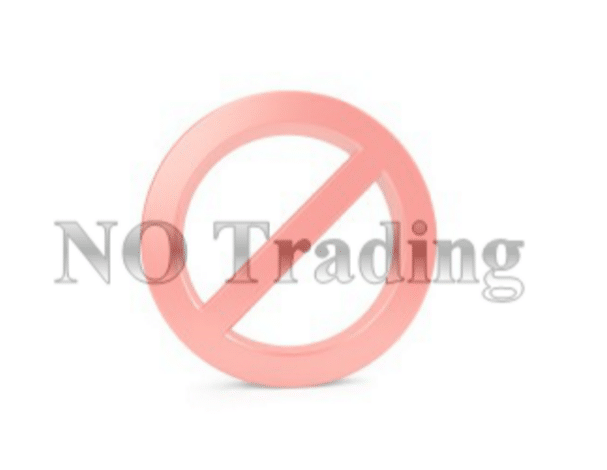 You also want to be careful regarding when you make your first trade of the week. Keep in mind the big guys i,e the traders in the UK and then the US do not open up until long after traders in NZ, Aus, Asia etc, and often especially if making intraday trades, you may want to wait at the start of the week until the big guys have joined in the trading.

The Best Times to Trade Forex

Charting platforms generally have many different time frame charts. When we say time frame we mean the time that goes into making an individual candle. These time frames range from 1 min through to 1 month. This means that on a 5 min candle, 5 minutes has gone into making that candle.

Traders that use technical analysis to trade will use these charts to analyse charts to trade. They will normally wait for a candle to close and then assess if it has made a trigger signal that fits their trade criteria.

When new traders come to Forex they invariably start on the smaller time frames such as the 5 min or 10 min candles. The main reason for this is the smaller the time frame, the quicker the candle closes and thus the more trading opportunities the trader can have.

The problem with this is that more trading does not mean more profits and in fact it normally works out the opposite. The smaller time frames are known for noise and confusion. Basically the smaller time frames the more wild and erratic they can be and generally leads to the more over-trading which is a massive account killer.

When learning to trade, starting with the daily chart trading strategies are not only much better because of better and more reliable signals, but they also give new traders the chance to take their time and make correct decisions. On the smaller time frame charts such as the 5 min chart, trading decisions will be rushed which is never ideal when making or managing trades.

That is not to say that price action cannot be traded on smaller time frames however! Once a trader becomes profitable on higher time frames and they have a consistently profitable method behind them, they can start to work their way down the time frames moving down as far as they want to go.

I go through this process and how a trader should move down the time frames exactly in this lesson at; Trading the Daily Price Action Strategies Down to the Intraday Time Frames

View all posts by Johnathon Fox →
Previous Post: « AUDUSD Tight Range
Next Post: What is Leverage in Forex Trading? Full Explanation with Examples »