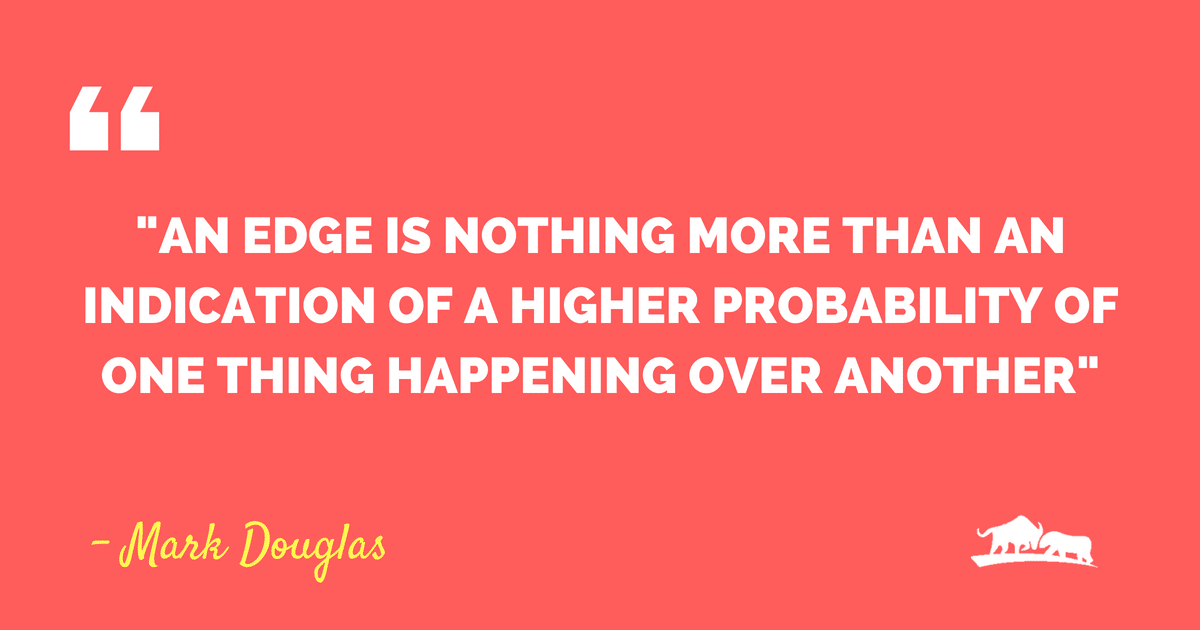 Mark Douglas is the late famous author of a range of trading psychology books with the most notable and profound for traders being “Trading in the Zone”.

Part of the Mark Douglas trading philosophy is that he believes there are five fundamental truths to trading and seven principles to trading consistency and that when these are understood and carried out the trader will achieve consistent profits.

Some of these can be very hard at first to understand, like the trading truth “You don’t need to know what is going to happen next to make money”.

In part one of this two part lesson we take a look at the five fundamental truths of trading the markets.

Next week in part two we will go through the seven principles to consistently profitable trading.

The aim of the game is long-term profitably. Many traders will have success at one point, normally at the start of their trading, but the goal is long-term sustained profits that can be replicated time and again.

The fundamental truths of trading are core principles of the market that are non-negotiable.

These are truths that traders need to accept if they want to make money and if they don’t, then they are going to struggle. A few of these points can at first seem a little hard for traders to get their head around and accept, especially for the traders that have a long history in the market with other losing systems before joining us here at Forex School Online.

No matter what system or method a trader uses, at the end of the day if they don’t have the correct mindset – they will fail. This is a simple fact. This is why two traders can take the same method and have completely different results.

Gaining the best mindset starts with understanding the basic truths of trading which will lay the groundwork for you to begin trading with less stress and more profits.

1. “Anything Can (and often does) Happen”

This is something that is all too often forgotten and disregarded by traders. Whilst this may seem pretty obvious and all traders consciously understand this trading truth, many don’t trade like it. What many traders will do when they see a great trade is risk more than they normally would.

When traders see a trade that looks the same as a winning trade they have played and made a lot of money on in the past, this rule can be quickly forgotten as they load up and risk more money than they normally would.

The reason we have money management and the reason we never bet the farm is for this very reason. It is at the times when the trader is at their weakest when their account will lose its most and this is when this rule must be remembered.

Anything can and does happen.

2. “You Don’t Need to Know What is Going to Happen Next to Make Money”

This goes hand in hand with the previous point. As traders we don’t need to know what’s going to happen to make money. It is not a traders job to guess what is going to happen in the market.

It is a trader’s job to have a profitable trading edge that ensures that over a large amount of trades they will come out profitable.

It is a trader’s job to know exactly what their edge looks like and every time they see their edge form in the market they pull the trigger without hesitation.

3. “There is a Random Distribution Between Wins and Losses for Any Given Set of Variables That Define an Edge”

If you have a profitable edge it means that over a set of trades you will come out profitable. It does not mean you will win every trade.

What is often misunderstood by traders is a traders win rate. If a trader has a win rate of 60% this does not mean they will win the next six trades out of ten. The 60% win rate is built up over a long period of time.

If I am to flip a coin I could either get a result of heads or tails. The win rate of both the heads and tails is 50%. If I was to flip the coin ten times I could come up with ten heads in a row.

This does not mean that all of a sudden that the win rate is no longer 50%, it’s just that we don’t know which trades will be our winners and which will be our losers. It is the same with trading win rates.

Over time, the flipping of the coin would even out the distribution of heads and tails and it is the same in trading, until eventually the 50% win rate would be restored.

This is how trading win rates work. If a trader has a win rate of 60% it means that over a large amount of trades they average 60% wins and 40% losses. It does not mean that they will win the next six trades and lose the next four out of ten.

You can read and take the coin flip trade management test at; Use the Coin Flip Exercise to Gain Edge Over the Other Traders 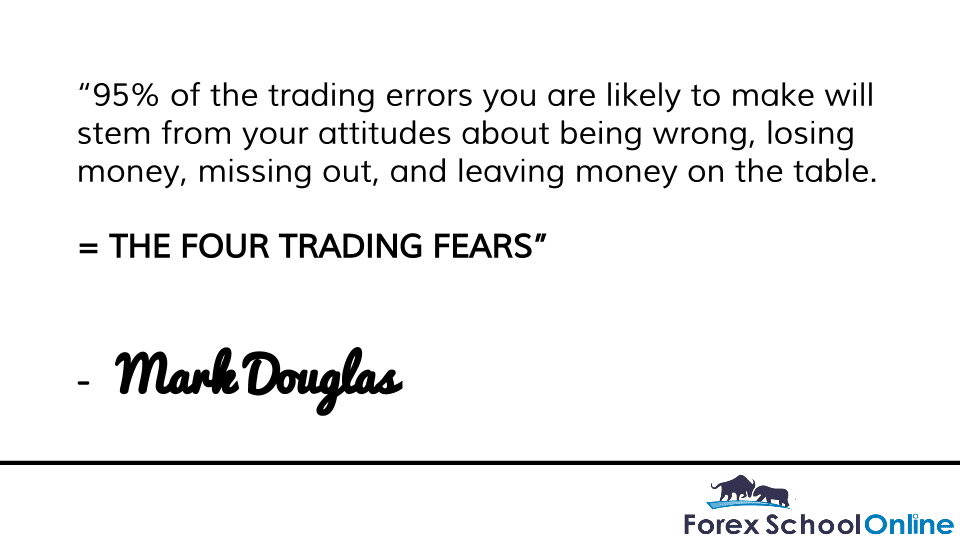 This is a very important point! There is a random distribution between wins and losses for any given set of variables that define an edge.

You NEED Money Management in Your Trading That Works.

We have to focus on the trading edge and the overall plan because whilst the individual trade does matter, in the scheme of things it is only another trade in the overall sample size of trades.

4.  “An Edge is Nothing More Than an Indication of a Higher Probability of One Thing Happening Over Another”

No matter how great a setup may look, it is still only high probability. Your price action trading edge is an indication that price has a higher probability of doing something over another. Whilst traders will lose individual trades, if they have a profitable trading edge, they will come out profitable in the end by being in enough high probability positions.

5. “Every Moment in The Market is Unique”

This can be easy to understand, but very hard to practice with trade setups.

As price action traders we are trading patterns that have been created from other trader’s behavior. The price action on our charts has been made directly from what other traders have traded.

For example; if other traders have sold, then price goes down and if they buy price goes up and this affects what price looks like on our charts.

The reason it can be hard for traders to implement this rule at first is because no matter how much the same two setups may look exactly the same, it does not guarantee that they will work.

Just because the previous setup may have worked as a great winner, does not make next trade that looks exactly the same any more chance to also be a winner.

Every moment in the market is unique.

Traders will often see a setup form in the market and it will look exactly like a setup that they have traded in the past, win or lose.

It will be on the same pair and on the same time frame and have all the same attributes such as a pin bar at key level etc.

Because the trader cleaned up last time and made a lot of money and this pin bar looks exactly the same, they will load up and risk a lot more than they normally would.

However; the previous pin bar has zero bearing on how this new pin bar is going to work out.

Why is it Impossible for the Market to Move the Exact Same Way Twice?

Obviously this is impossible!

This is why every moment in the market is unique and also why no matter how great a setup looks or how similar it may look to a previous setup that worked out, it can still fail!

The same goes for when you skip trades that look the same as a previous trade you have lost money on, even though they fit your rules and trading edge. The previous trades do not affect what will happen next.

NOTE: Below I have added a quiz cheat sheet that will show you what type of trader you are and I have included a bunch of signup bonus's.

Most traders have a profit gap in their trading.

This profit gap is the amount of money that they could and should be making, but for a particular reason or reasons are not.

The reasons more often than not are NOT system or method related, but how the trader looks and thinks about their trading.

If a trader uses the same mindset and thinking patterns with every system, then every system will fail! That is why learning how to start thinking differently about the markets is crucial to your success.

Learn how to close the ‘profit gap' that exists between the amount of money you should be making, and what you are actually making by reading the lesson;

How to Close the Forex Trading Profit Gap

Keep an eye out next week for Part #2: The 7 Principles to Consistently Profitable Trading