One of the hardest and most tricky markets to trade can be the sideways and ranging Forex market.

The problem for traders is that the markets spend a lot of their time trading in sideways or ranging motions and not in clean and obvious trends which would make trading a lot simpler and easier.

In recent times the market has been trading sideways and caught ranging in a lot of Forex pairs, so this is a perfect time to write a trading lesson on how to trade price action in a sideways trading market to help traders on how they should approach these types of markets and how they can get the highest probability trades out of ranging and sideways moving markets.

Because the tight ranging market is when traders can often get sucked into making rubbish trades, it is super important that traders learn when are the best times to hunt for trades and the other times to let the market move through the range and let the market show its hand before, then looking for potential setups.

Do You Look for a Trend on EVERY Chart?

One of the most common mistakes a lot of traders make is that they look for a trend in every chart. Quite often a trader will move to analyse the chart in front of them and because they have heard the sayings that are often spread around the Forex world such as “the trend is your friend until it bends” etc, they will make the mistake of looking to identify a trend even on the charts when there is not one to be found and price is trading sideways and in a range.

Price will often move very differently when it is moving in-line with a strong trend compared to when it is moving back into a choppy sideways trading range, so it is super important that a trader starts to identify the market correctly.

The truth is that Forex pairs are trending a heck of a lot less than what they are spending time in periods of consolidation and trading sideways. A major rule of the Forex market that is repeated time and time again and something that I discuss regularly in the daily Forex market commentary section, is what I refer to as the “Consolidation and Continuation” price action movement. Price spends a lot of its time in “consolidation”.

This is when price is trading sideways and ranging. Normally price will be consolidating after a large move either higher or lower.

This is as it sounds, where price breaks out after the sideways consolidation period and continues in the same direction that price was trading in previously before going into the consolidation.

This continuation period can also be one of the best times to get into trades as price will be moving as its free flowing best, rather than being caught trading inside a consolidation or sideways range movement.

This pattern repeats time and time again on all time frames and traders can take great advantage of it, if they are aware of it, but they need to be aware of which cycle price is in and not get caught out.

Price will move a lot more strongly and freely in the continuation phase where as when price is caught in the consolidation and ranging phase traders need to be aware that trading can be slow and price is likely to move sideways. You can see an example of this below: 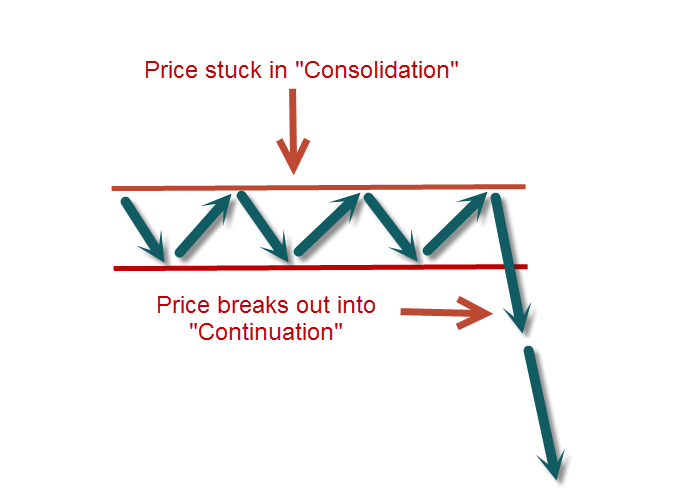 Because the Forex market spends so much of its time in a period of sideways trading, it is super important that traders learn how to successfully trade ranging markets.

You Need to Master Range Trading

Whilst I encourage new traders to at first to stay clear of trading against the strong and obvious counter-trending markets until they have some more experience and they can then learn when are the optimum times to cherry pick the best counter-trend trade setup opportunities, when it comes to trading in ranging markets, which can be just as tricky at times, I encourage new traders to learn straight away from the start, simply because of the amount of time the market spends in ranging and consolidating markets.

If traders don’t learn how to trade the sideways and ranging market successfully, they are either going to be sitting on the sidelines for long periods of time waiting for trends come along, or they will be entering trades and taking on losses..

Sometimes a market will be so choppy or in such a tight and messy sideways range that it becomes such a high risk market that it is no longer worth making trades until the market either calms down or “shows its hand” by making a clear move either way. In these types of markets, inexperienced traders can often be sucked into making low probability trades because the price is trading in the same spot and just chopping up and down not making any ground.

The best option in these scenarios is for the trader not to force trades and try to be a hero when there are no trades to be made, but to let the market show its hand and make a break either higher or lower.

Once this break has occurred, the trader can trade with the break and new momentum.

The chart below shows a super choppy market where the best play would have been to let price make a clear break either higher or lower and then jump in and make a trade, when it was more obvious what price wanted to do. Trading this way is taking a heck of a lot of the risk out that is involved with the super choppy and congested markets.

Where to Hunt Trades in Ranging Markets

One of the biggest mistakes most traders make when it comes to range trading is where they make their trades. Most traders time and time again look to make their trades inside the middle of the range and this not only cuts their potential probability of the trade down, but it kills their risk reward as well.

The reason for this is the middle of the range is where price is doing the most whipsawing and chopping around increasing the likelihood of the trade being stopped out.

In the middle of the range is where all the minor support & resistance levels are, so trading in the middle means that any trades placed will be trading back into a bunch of minor levels that will have to be worked through for price to to get anywhere.

Traders need to be looking at the highs and lows of the range to be making their trades. Not only will this help with their trades, but also help their risk reward potential because price will have more room to fall and hence more profit potential.

Where traders get into trouble is in the middle because this is normally when price will chop and also where the moves are the shortest lived and will roll back over.

Sometimes the Best Trades are After the Range

The best trades are often made after strong range and sideways periods have just broken out. These trades are only made however, if the price action trader is both alert and adaptable. The two keys to making good trades after the price has been in a range are; 1: Being able to mark solid support and resistance levels and 2: Having a routine that allows you to be alerted once price has broken out of the range. Just below, I have attached two trading lessons that I suggest you come back to at the end of the article that will help with both of these two key elements.

Once price has broken through and importantly strongly closed outside the range, traders can then look for trades at the new price flip area.

Traders could target that old resistance to act as a new support and an area where they could look to hunt for new bullish trades. These levels will often act as solid price flip levels because the price in the range has previously respected them many times, so once price does break out of the range, it will then often flip and respect them again.

An example of this happening on a chart is below; price was trading sideways for a sustained period of time, but during this period it was also trying to breakout through the resistance level.

Once price eventually broke out of this resistance level, traders could then start watching this level to act as a new price flip level and to act as a new support level for possible new long trades. Quite often these new price flips will act as strong levels because before breaking out of the range price has tested them many times. 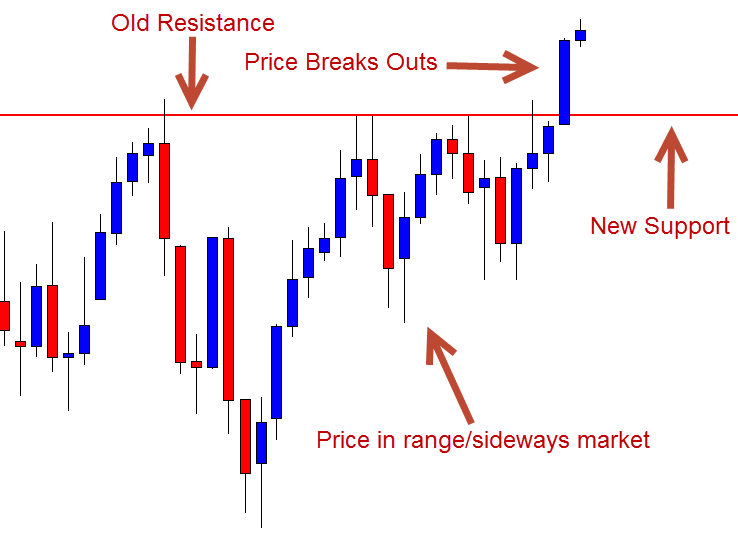 Using What You Know

When evaluating a trade, the whole price action story must be taken into account, not just the last candle or two on the chart. Keep in mind when going forward after reading this lesson a few major points;

I often discuss markets and setups that have formed in sideways markets and ranges in my Daily Forex Market Commentary that you can follow each week when I post it after the daily New York close. I

I really hope you enjoyed this article and also hope you can put this information to really great use in your own trading. If you have any questions or need any help at all, just pop your questions below in the comments section and I will get back to you ASAP.

If you enjoyed this article, then please pay it forward by hitting the like buttons and leaving a comment.

Safe trading and all the success,