It can be incredibly hard for a trader to stay focused and disciplined, sticking to their trading plan, risking small amounts of their account and never over-trading when this will lead to what at the time can seem like insignificant gains.

This is all relative, but a trader who lives in an expensive city, has four kids and a dog, is going to need to be making a lot more money than the trader living in another part of the world where living expenses are cheaper and they only need to provide for themselves.

The account size requirements will vary a lot, but the principles remain the same; if a trader needs to make $5,000 per month to pay their bills and they are starting with a $5,000 account, they would need to double their account every month, just to pay their expenses.

Account size is a huge variable. It can change your whole mindset.

Account size is a huge variable. It can change your whole mindset.

It can mean you stop looking for bigger winners, making rubbish trades you should not be, and also help you cut losses instead of hoping they turn back into winners.

Instead of hoping like heck you can make some huge percentage gain, you are able to make a far more realistic return.

There are four main options to making serious money in trading, building a decent size trading bank, or going full-time without having to bet the farm every single trade and risk losing your account.

This is probably the goal of most traders.

Having a decent size account of your own allows you a lot of freedom. As you have more money, the amount of money you can make that becomes impactful to you also increases.

Whereas previously you may have had to double your account to have real monetary effects in your life, with a big account it can only be a few percent.

As already discussed; this can create a huge mindset change.

In the lesson 3 Months or 30 years I show in the example cheat sheet how with regular small deposits and profitable trading you can build your own account.

This also shows just how quickly the trading account snowball can grow and grow.

#2: Trading With Friends or Families Money

A lot of people have tried and will continue to try this. I would be extremely cautious of attempting this method no matter how confident you are in your trading abilities.

Trading and making profits is one thing. Explaining to friends and family why their account has lost for the month, or why they made a certain amount of money in one month and then not in the next is a major pitfall.

This is a huge amount of stress and psychological pressure to add into your trading when pulling the trigger on trades, cutting losses and taking profits.

Basically; you will have to explain everything – every move higher and lower.

With technology the way it is, the traditional method of joining a prop fund or another program as a funded trader is not nearly as popular as it once was.

With the markets open to far more traders these days than at any other time in history, opening a trading account is easier now than it has ever been.

If you have a small account that is not yet at the size needs for your trading goals, and you are either profitable now or just becoming profitable, then becoming a trader on a social platform and being paid to have your trades copied could be the boost your account needs.

When you use a platform like eToro as a trader and begin to have your trades followed, you will begin to grow the amount of money you make just by doing what you were already doing = trading.

You can earn commissions and monthly payments for being a profitable trader and sharing your trades with others.

If you are not yet profitable, then you have the option of investing in other funds or traders that are, whilst you build your own trading account.

Three things to note about this;

Understand when a trader is showing massive profits, and instead they are making huge losses (images below).

Below is an image of one of the popular PAMM = Percent allocation management module follow sites and the current number 1 ranked trading fund on the site.

You will notice a lot of the PAMM investing sites have accounts and graphs showing their traders making absolutely ridiculous amounts of percentage gains. That is because in almost every single case it is.

In reality all these accounts are doing is either spinning as many trades as possible to get paid commissions from followers or their profitable trades, and using a loophole that some PAMM companies allow meaning only “CLOSED” trades are counted.

This means an account can make $1 million dollars of profitable trades broken up into a ton of little trades and the PAMM account holder will get paid for them. This will show they have made a massive amount of profit, and a huge percentage gain and will give a very pretty graph.

However; they can also be holding $2 million dollars worth of ongoing losing trades with no stop loss, and that they have no intention of ever closing, because the moment they do it will show in their account statistics.

At first glance you would think the number #1 ranked trader has made over 29,000% percent profit which is amazing. This PAMM fund has actually lost money and made no gains, like many of the huge PAMM funds showing pretty graphs. 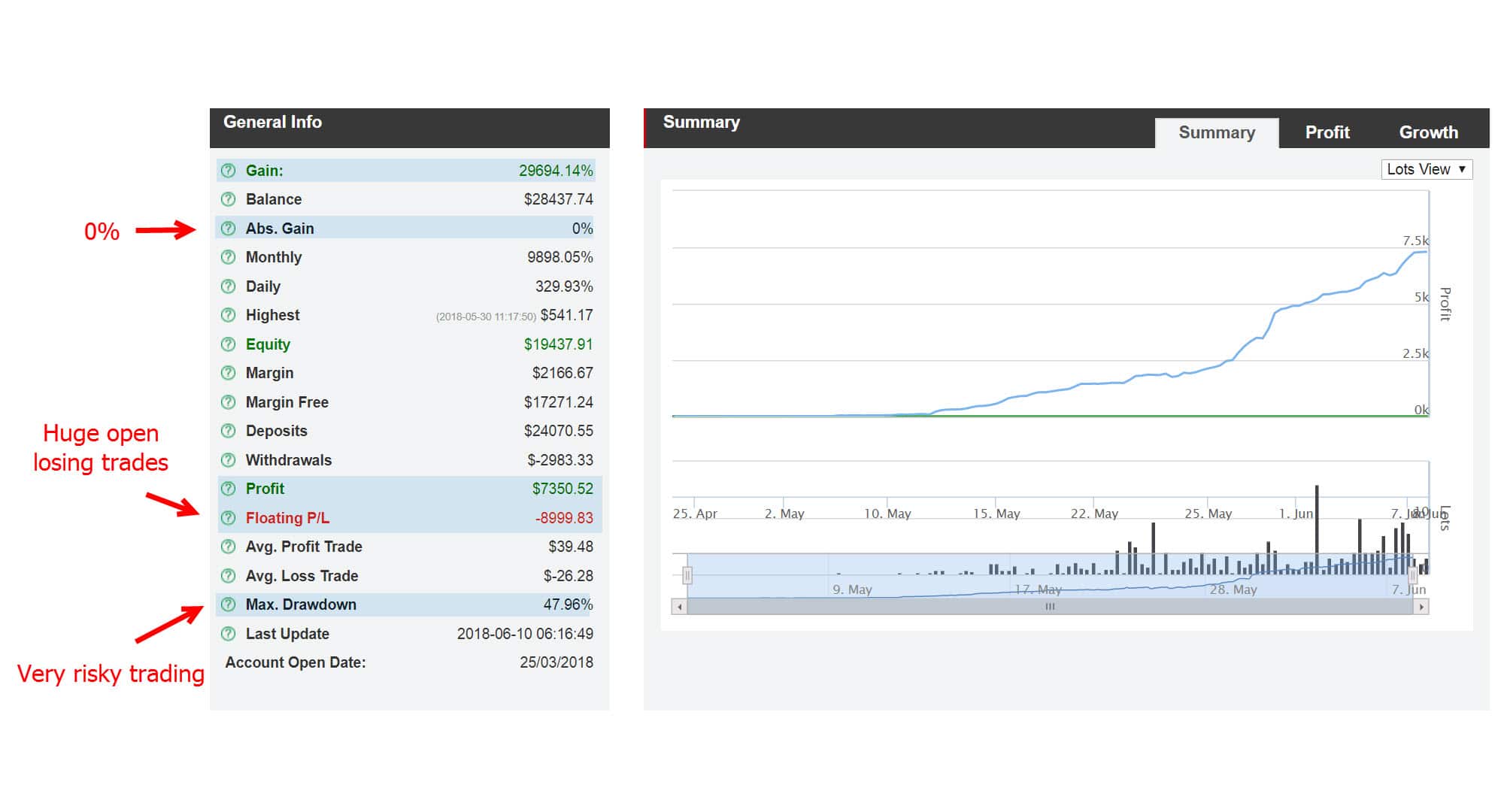 #2: Spread Your Capital Over Multiple Traders, Like an Investment

You would not risk 100% of your trading account on any one trade, and this is the same with following any trader or investment.

The best strategy is to become your own fund manager. This means you allocate a percentage of funds to different traders, use an amount for your own trading and another amount for cash or other investments depending on your own situation.

The company with the most accurate stats on their traders, that do not let them rack up huge ongoing losses or make very risky trades without cutting them off is eToro.

Below are a few of the stats you get when looking to follow trades of a certain trader on eToro. 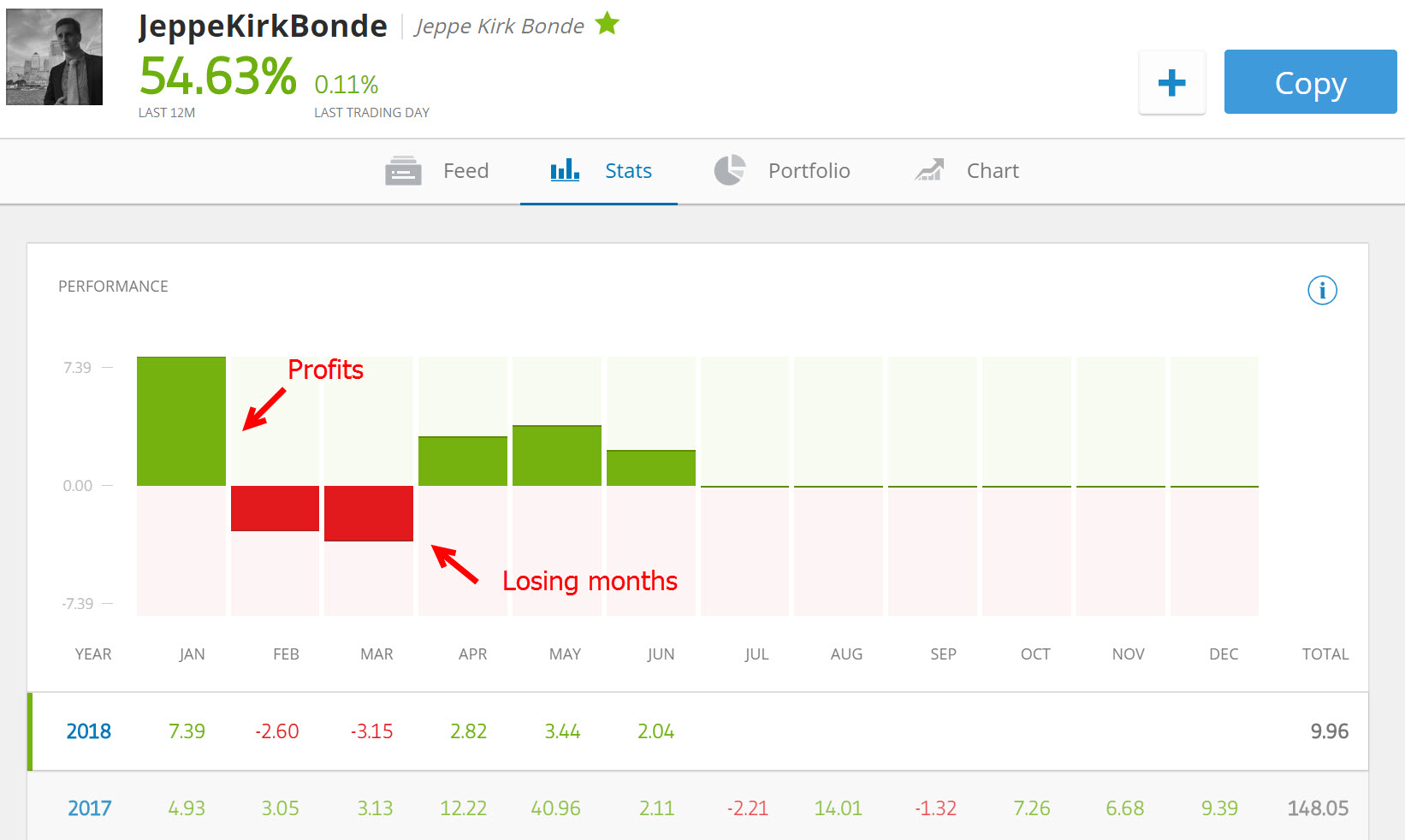 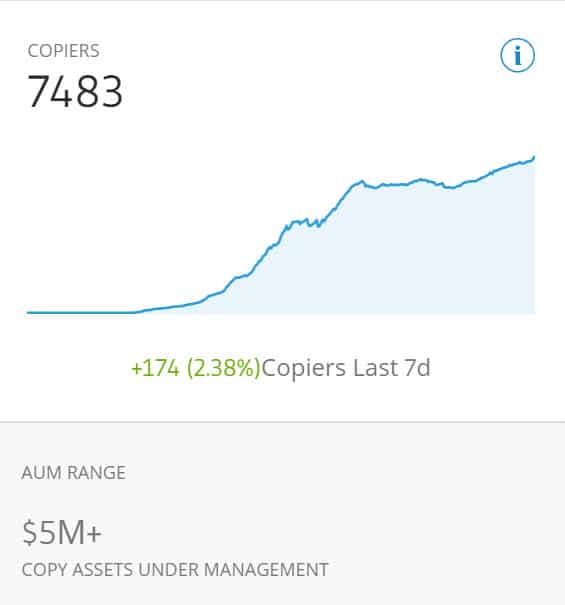 #3: Be Picky in the Platforms and Traders You Choose

There are a lot of profitable traders. In lessons previous we have discussed how in some markets like the EURUSD the winning trade rate is over 60% and also how traders average more winners than losers.

You will notice that the average profitable trader on sites like eToro who has a large following is making anywhere from 30-60% per year from their trading.

Sometimes more, sometimes less and they have bigger months and losing months.

As we have often discussed; this is normal. If you average 3-6% per month, then after having winning and losing months, that is what you can expect with some years being better.

As you can see in the image above, you are able to see real winning and losing months, average amount of trades per week, maximum draw-down and how much money this trader has under management.

You Can Checkout eToro Here

One of the hardest parts for a new trader is getting an account size that allows them the freedom to reach their trading goals and not have to strive for ridiculous gains.

Investing in other traders whilst you become more consistent in your approach can be a good strategy, but your end goal should be to become self sufficient, allowing you to not have to rely on others to make your trades.

View all posts by Johnathon Fox →
Previous Post: « Do You Need to Transform Your Trading to Stay up to Date With the Rest of the Market?
Next Post: Inside Bar Sends AUDNZD Retracing Into Potential ‘Kill Zone’ | 14th June 2016 »