In mid-August 2020, the US dollar slid to a two-year low marking a year-to-date drop of -3.5%, its weakest level since June 2018, according to the research data analyzed and published by the ForexSchoolOnline.com. Interestingly, the USD slide coincided with a rising number of short positions. 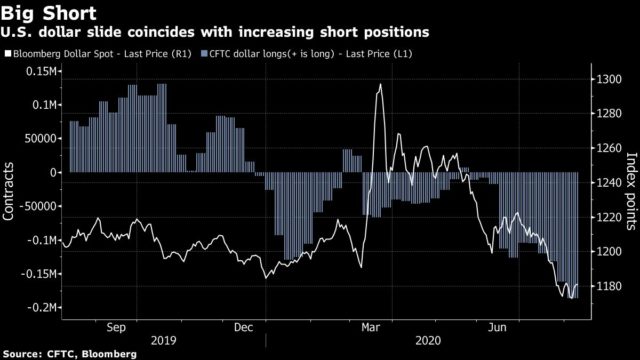 Short trades on the currency hit a two-year high around the same time as investors adopted an increasingly bearish stance towards it. Over the four-month period between April and July 2020, the dollar has been sold against its G10 peers, with bets against it continually mounting.

Around the end of July, hedge funds reported being net long on the euro, once again, for the first time in two years according to a Bloomberg report. Spot price action on the EUR/USD pair has been on a tear since mid-May. Toward the end of July, it hit a two-year high of $1.1908.

In part, this was the result of a historic joint stimulus proposal by France’s Macron and German’s Merkel. The two parties agreed to launch a €500 billion recovery fund to assist EU member states in view of the coronavirus-battered economy. By July, EU leaders had raised the recovery fund figure to €750 billion, further improving sentiment on the euro.

The dollar index, a yardstick that measures the performance of the greenback against other leading currencies, also reveals that July 2020 was one of the USD’s worst months. During the month, the dollar recorded a drop of more than 4%. This marks its worst monthly decline since September 2010.

Net shorts on the USD at the beginning of August 2020 soared to $24.27 billion according to calculations made by Reuters and data from the US Commodity Futures Trading Commission (CFTC). This is the highest level since August 2011.

The weakness of the greenback has been attributed to multiple factors. One of these is the fact that lawmakers have yet to come to an agreement on further financial stimulus. Moreover, there is pressure arising from expectations in the market that there will be further easing of the monetary policy.

U.S bond yields are also falling, and this too has been cited as a factor. Other factors driving investors away from the greenback include rising tension between the US and China, escalating rates of infection and weak data on the job situation.

In view of these developments, experts have warned that the USD might lose its position as the world’s reserve currency. According to data from the Bank of Russia, the country now gets more euro compared to dollars for the products it exports to China.

The reason why this data matters has to do with the fact that the euro is the top competitor of the dollar. According to the IMF, the euro holds the second largest share of global currency reserves, 20% compared to the dollar’s 60%.

Currency strategists from Goldman Sachs have also highlighted the increasing value of gold as a cause for concern regarding the longevity of the USD as a reserve currency. 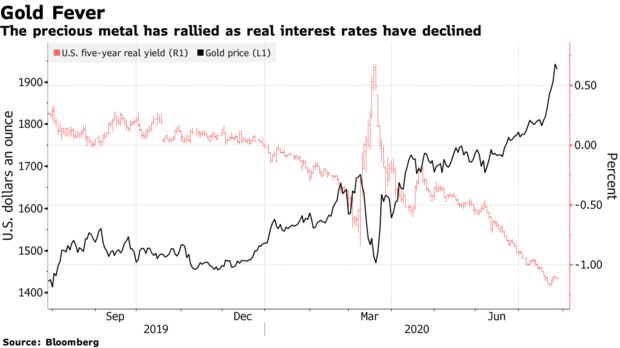 Meanwhile, investors are showing remarkable optimism with regard to a number of Asian currencies. According to a Reuters poll carried out in August 2020, the number of long bets on the Chinese yuan is at its highest level since the early months of 2018. Investors turned bullish on the yuan in July following a central bank assurance that the economy was on its way to recovery.

Similarly, the Philippine peso, currently the top performer in the region has seen long bets reach their highest since early 2013. The Singapore dollar and the South Korean won are also top beneficiaries of the USD pullback.

Bullish bets on the South Korean won have more than doubled to their highest level since December 2018 while those on the Singapore dollar have hit an eight-month high. Notably, in July, the same month that had the USD registering its lowest lows in 2020, the Japanese yen gained 3% against the dollar.

On the flip side though, the Indonesian rupiah has seen bearish bets more than double following interest rate cuts by the Central Bank for the fourth time in 2020.