In most of the articles we make at Forex School Online we discuss the best setups for price action traders to find and how to trade them. What’s often overlooked is what traders should be avoiding and steering clear off.

I have updated today's lesson and refreshed it because traders regularly ask about the trades and markets that need to be avoided.

This lesson is going to cover the four most common trades I see traders make that they would be better off leaving alone. If you are a price action trader these setups will be familiar to you and after reading this, you will hopefully have a better understanding off how to avoid them in the future.

This is a setup that commonly sucks traders in that are new to learning the Pin Bar.

NOTE: Valid Pin Bars have large noses that stick out and way from price. To re-hash on the pin bar read here: Pin Bar Reversal Tutorial.

The inverted Pin Bar is the Pin that forms pointing the wrong way. Looking at the price action chart the first thing that should be obvious is that instead of the nose of the Pin Bar sticking out and away from price, it is instead sticks back into the price.

The first Pin Bar on the left is the inverted Pin Bar. Notice how this Pin Bar is down at the low and is not sticking out away from price, but rather the nose of the pin is sticking back into price. The valid pin bar on the other hand has a nose that is up at the high and sticking right up and away from all other price. 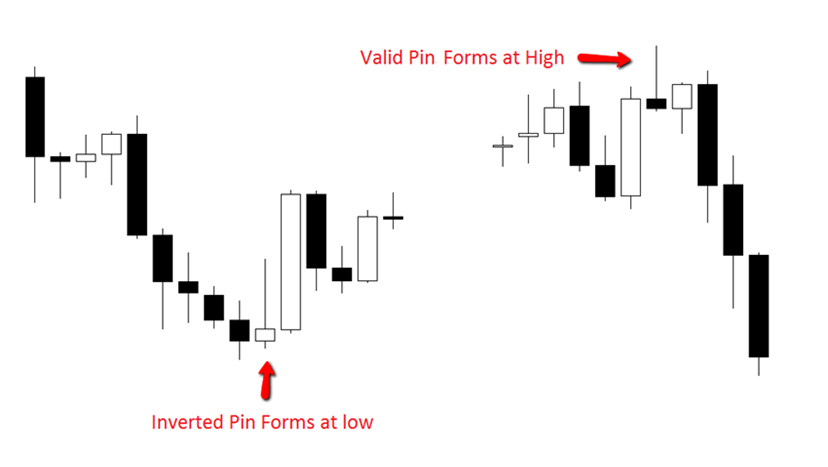 The chart below shows an inverted Pin Bar. Notice how instead of this bullish Pin Bar being down at a low and sticking down and away from price it is instead up at the high which then makes it stuck and sticking back in at price making it look “inverted”. 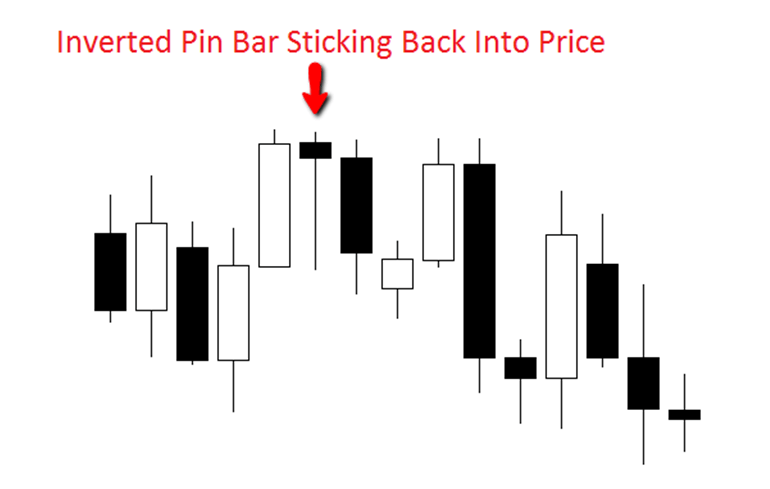 Quite often the inverted Pin Bar is hinting at price moving in the opposite direction to what the Pin Bars normally indicates and this is why they are so often sucker trades.

For example; Bearish Pin Bars are normally a clue that price is about to move back lower, but the inverted Pin Bar, like the first example on the chart above is actually a price action signal for price to move back higher.

Traders looking to trade that Pin Bar lower would be entering a signal that is actually hinting at higher prices! It is extremely important that when looking to trade all Pin Bars they are traded form the correct areas on the charts.

Checkout the current chart daily chart of the AUDCAD and the inverted pin bar price printed off in the image below; 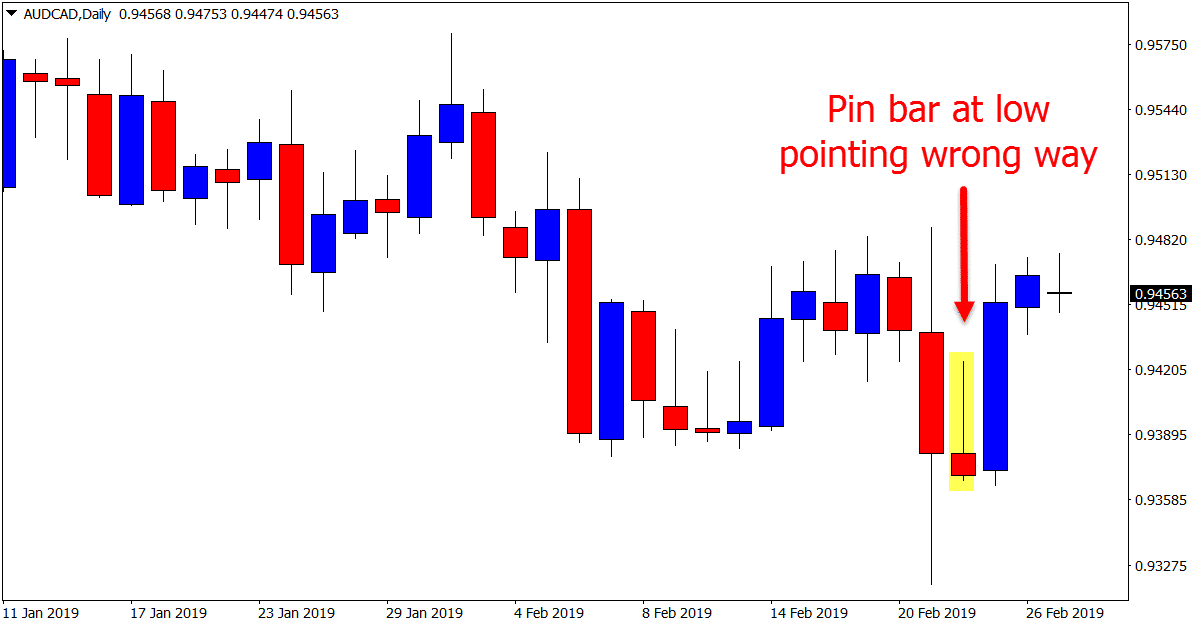 #2: The Reversal Signal Buried Away in Price

The reversal signal that forms in traffic is a price action signal that can cause quite a lot of frustration for traders who take them as they tend to bounce around from level to level rather than moving in the desired direction.

Below we have highlighted two different charts. The first chart on the left shows two bullish engulfing bars that are both buried away in price. Both of these setups are low probability setups. 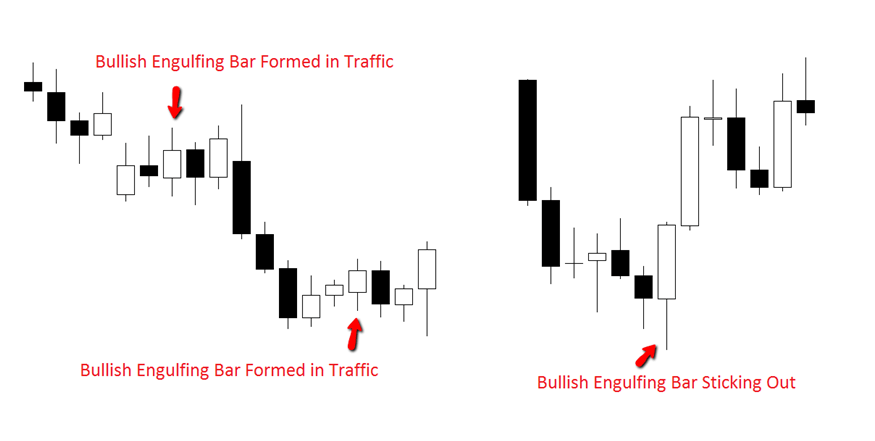 The chart below is the current EURAUD chart showing a recent bearish engulfing bar that was not at a swing high as we will discuss below, and because of this was stuck in ‘traffic' making it hard to move. 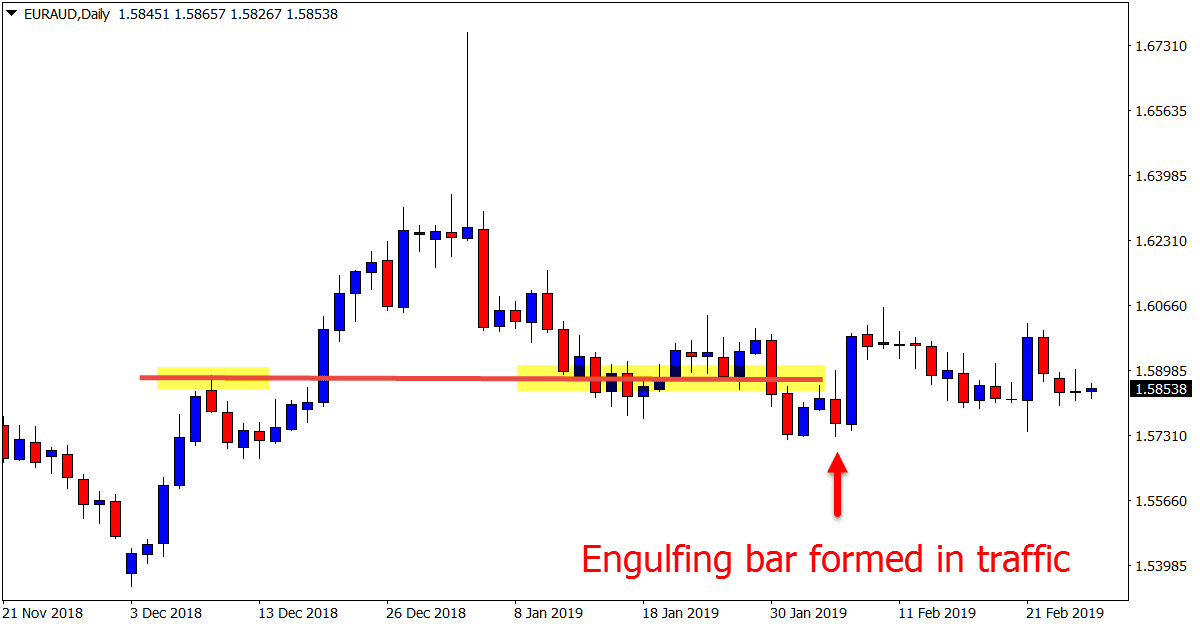 #3: The Signal From the Incorrect Swing

It is also one of the most important keys to finding high probability reversal trade setups.

There are a few key points that traders need to keep in mind when trading reversal signals that will hold them in good stead which are;

To learn more about what exactly swing points are you can read an in-depth tutorial here: Trading Price Action Swing Points 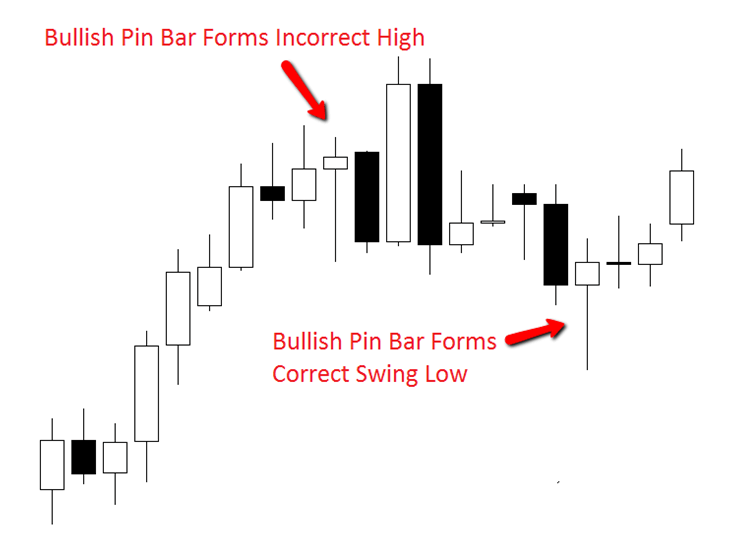 Below is an example of the EURAUD chart this time showing a bearish engulfing bar that is formed at an incorrect swing low. To make a bearish reversal trade we would need to see it form up at a high. 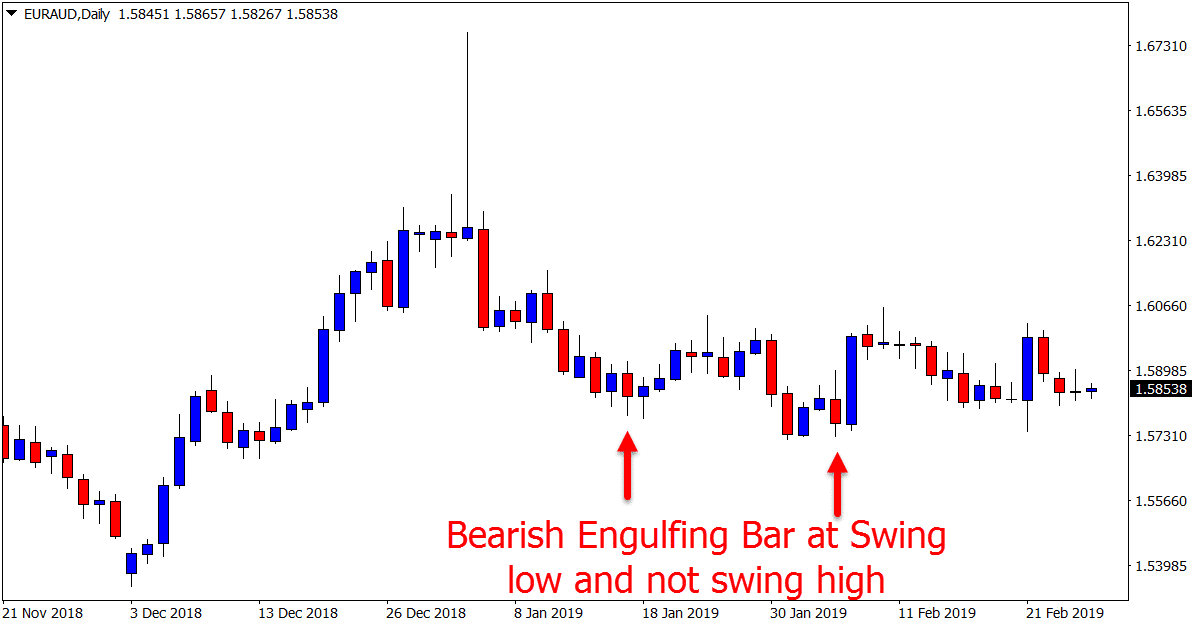 #4: Pin Bars With Wicks on the Other End

The best Pin Bars are the Pin Bars with big long noses or wicks that stick out, but what we don’t want on the good Pin Bar’s is wicks on the other end of the candle. See the chart below for further explanation: 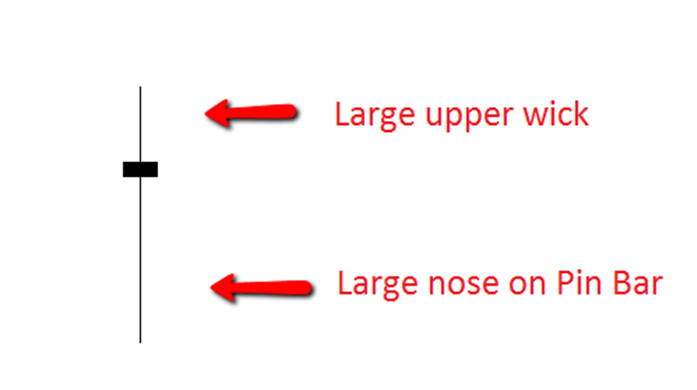 The bullish Pin Bar example above has a great long nose that is exactly what traders are looking for when hunting bullish Pin Bars, but the upper wick can create problems and because of these wicks, traders should often avoid pins with large upper or lower wicks on them.

The danger with the upper or lower wicks on Pin Bars is how they were created. Often the wicks on candles are created from the order flow price action rejecting a level.

For example; price moves up higher to a level and the bears (Sellers) jump in to push price back lower and an upper wick is created. In this example we can see that resistance came in from higher prices and this is why the upper wick was created. The risk that if price goes higher again this resistance may well hold again and trading straight into an area of support or resistance is never a smart play.

In the example below we have a bearish Pin Bar.

On this Pin Bar below you can also see a lower wick. This wick is created using the same process and this is why wicks on the other ends of Pin Bars can be tricky and at times dangerous.

Price in the example below has tried to move lower, but has found support and the bulls (buyers) have held firm and managed to push price back higher which has created the lower wick on the Pin Bar. 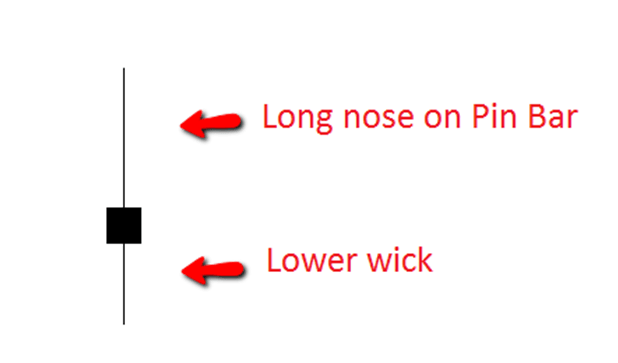 The risk with the upper and lower wicks comes when you go to enter a trade with the Pin Bar. If you were to trade the example Pin Bar above you would be going short.

The danger with selling in this position is that we can see from the lower wick that price has already tried to push lower and has not been able to. Price tried to move lower and the bulls (buyers) jumped in and pushed price back higher. If you enter this Pin Bar, you run the risk of entering the trade and the bulls pushing price straight back higher and being stopped out.

In this article we have covered the not so much talked about subject of what not to look for. I have found this to be surprisingly what a lot of traders want to learn about. Price Action trading is something that is continually learned and perfected. As the markets adapt and change it is our job as traders to continually adapt and change with them.

Make sure you start with a demo trading account and practice the heck out of your strategies so when you trade with real cash you know what trades to avoid, and what to jump into.

I would love to hear your comments and any questions in the comments below.